We want to get better at predicting things, so the following question is very fundamental:

How do we reward people for giving us better predictions?

Let’s start by thinking about how we might make a rule for this when there are $2$ outcomes. For a natural first draft, we can just have you bet 1 unit of score at even odds. This means if you bet correctly on the desired outcome you will gain 1 point, and if you were wrong you will lose 1 point. For example, you can guess “the temperature tomorrow morning at 6AM will not be between 60 and 70 degrees.” If the temperature at 6AM ends up being 56 degrees, you will get 1 point.

Over time, it’s clear that people who do well at this will in general score more in the long run. However, there’s a way in which this rule fails to let people show their skills. For example, suppose for every single event with an actual probability of 60%, you are perfectly calibrated and know this, but Jean always thinks the probability is 100%. Under our naive draft, you two will always bet the same way, “yes”, in these events, but the relative skill between you will never be discovered. This gives rise to our first main idea - we need to show the distribution of a prediction, not just a single number.

So… draft 2! You bet on something like “it will snow tomorrow” by giving a probability $(p)$. Then, you get $(p)$ points. (so if you bet “90%”, then you get 0.9 points if it snows and 0.1 otherwise). This is better than the first draft since you are offering more information about your beliefs, but it has a very interesting flaw. So take a couple of minutes to think about this:

The answer is that if you think there’s a 60% chance that it will snow, your optimal strategy is to actually bet 100%! This means while our draft 2 lets people show their skills, it also incentivizes them to hide their skills by betting something that doesn’t represent what they actually think. While this is interesting from a game and psychology perspective, in the context where we are trying to see how to predict things better and/or get some information from what people are actually betting, we want to extract people’s true beliefs about things. To mathematically formalize the things we wanted up to this point:

So what’s a good example of a strictly proper scoring rule? If you are only going to remember one, that would be Good’s logarithmic scoring rule. This is defined by $(f(q, i) = \log(q_i))$, where we are using the natural log.

There are pros and cons for both rules. For example, the logarithmic rule is more sensitive at small probabilities than the quadratic rule, which could be either good or bad depending on what you want to reward the forecaster for. Besides these concerns, it is always good to keep in mind that being strictly proper is not the be-all and end-all; there might be plenty of reasons to pick scoring rules that are “almost proper” but achieve other goals, such as being more intuitive for forecasters, having positivity and negativity be meaningful (for example, as stated all log scores are negative!), etc. See Greenberg’s paper for some ideas in this direction.

Remember that our original goal was to reward people for making better predictions. A natural way to do this is to set up structures such as games and/or contests that reflect better predictive abilities. There are two major categories of such structures.

The first such category is called prediction markets. While this word is itself ambiguous, it typically means (such as in Wikipedia) classical financial markets where you buy or sell abstract objects that reflect your belief in an event that will resolve in the future. 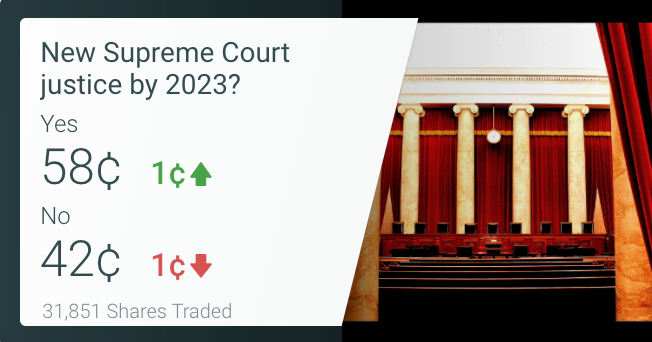 The second such category is something we call prediction platforms, where instead of trading, you enter predictions like how you would submit a structured answer to some sort of online exam, and then you get points based on a… (usually trying to be strictly proper) scoring rule!

While the second type, prediction platforms, may end up being more directly relevant to our class, prediction markets are a good way to get priors and learn about what people think about some particular subject. We hope your predictive skills will be sharpened by interactions with both predictive markets and platforms!

(Thanks to Frances Ding, Alex Wei and Eric Neyman for help preparing this post. I also learned from and recommend Tim Roughgarden’s computer science-oriented lecture notes)

Now, let’s turn the question around and ask our “wishful thinking” selves: what $f’()$ would make this work?

I leave the rest to you to see that these two options exactly correspond to the quadratic and log rules, respectively!